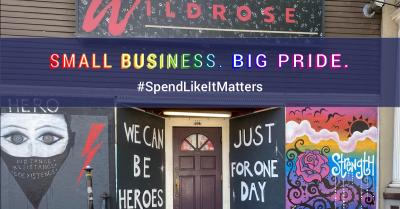 With Pride Month only weeks away, store shelves once again are becoming much more colorful. Products from Doritos to Listerine have begun marketing to LGBTQ consumers in hopes that a rainbow-colored bag of chips or bottle of mouthwash will reflect the same pride and struggles that have come to define the resilient LGBTQ community. However, this marketing comes at a difficult time as we move into another "unprecedented" year.

As a result of our nearly 14 months of quarantine, the government reports that overall, industries are facing a negative 5 percent unemployment rate, and low-wage workers have been hit even harder with a negative 9 percent rate. With lower rates of employment we are seeing a staggering drop in money circulating through the economy, which means more families struggling to provide basic necessities for themselves and their children. An April survey by the Center on Budget and Policy Priorities indicated that 11 percent of households with children reported not eating at some point in the last seven days due to an inability to pay for food. One in nine Americans are going hungry as the country spirals into another economic recession.

Small businesses are some of the hardest-hit victims of this new recession. According to a White House fact sheet, small businesses account for 44 percent of U.S. GDP, create two-thirds of all net new jobs, and employ nearly half of America's workers. In a statement released from the White House briefing room on February 22 of this year, the Biden administration vowed to improve upon the Paycheck Protection Program to get more emergency loans out to small businesses that are struggling in the pandemic. However, on May 5, the Small Business Administration announced that the PPP has run out of money for most borrowers, and no new applications are being accepted.

Tough times for LGBTQ business These financial struggles have been impacting many small business owners, but for LGBTQ folks, this new challenge is just another cog in the machine. With its 2018 ruling in Master Cake Shop v. Colorado Civil Rights Commission, the Supreme Court overturned a lower court decision which had held Master Cake Shop accountable for discrimination on the basis of sexual orientation when the owner, Jack Phillips, had refused service to a Gay couple. Master Cake Shop effectively turned the high court's previous ruling in Obergefell v. Hodges, which legalized and legitimized same-sex marriage, into mere opinion. In a concurring statement, Justice Samuel Alito wrote, "The First Amendment gives individuals the right to disagree about the correctness of Obergefell and the morality of same-sex marriage & [t]he fact that [the social acceptance of homosexuality] may be embraced and advocated by increasing numbers of people is all the more reason to protect the First Amendment rights of those who wish to voice a different view." Alito, who dissented in the Obergefell ruling, thus asserts a First Amendment right to discriminate that stands in stark contrast with federal anti-discrimination laws.

The fact of the matter is no federal law yet exists to protect LGBTQ patrons and business owners from discrimination. As a result, prominent religious groups and figureheads have been successful in actively boycotting LGBTQ-run businesses. In June 2015, famed evangelical Christian personality Franklin Graham called for a national boycott of Wells Fargo after the company aired a commercial featuring a Lesbian couple. Since then, conservative Christian groups have targeted seemingly everything LGBTQ-friendly, from the Hallmark Channel to Home Depot. Targeted boycotts aimed at major corporations can cause a little financial sting, but targeted boycotts of small businesses can be fatal. Many LGBTQ small businesses depend on revenue generated during Pride month to stay alive. The U. S. Department of Commerce has reported that LGBTQ patrons provide $917 billion in spending each year; however, much of this is directed towards corporate businesses and products. These corporations that pander to LGBTQ folks during the month of June are the same ones that can survive targeted boycotts, and far too many of them do little or nothing to advocate for the LGBTQ community.

Federally, the U.S. has done much more to protect the rights of anti-LGBTQ small businesses than they have to protect the rights of LGBTQ business owners and patrons. While LGBTQ acceptance and a pro forma sort of allyship have become common and even commercialized in the corporate world, the practice of slapping a rainbow flag on a well-known product is actually detrimental to the LGBTQ community, as it directs funds away from small businesses and local economies and into the pockets of major corporations. Small businesses are fundamental to communities. LGBTQ-run businesses provide an income and community for struggling young people and families.

Vote with your dollars So, if you are a member of the LGBTQ community, or one of its allies, who happens to be lucky enough to have the money to spend this June on rainbow merchandise and glittery products, it might be worth your time to invest in some local small LGBTQ-run businesses. In a time when harmful discriminatory practices persist against LGBTQ business owners and patrons, and when small businesses are facing a new, unprecedented, crisis, local LGBTQ businesses could use all the help they can get. The Greater Seattle Business Association (www.thegsba.org) offers a wide selection of local LGBTQ-friendly businesses that would love to see you and have your support - not only this Pride month, but all year long.