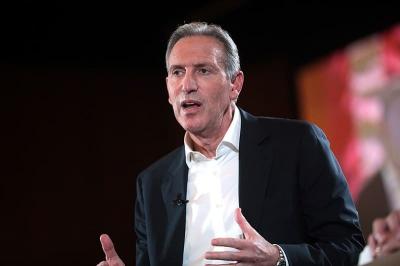 SEATTLE--(BUSINESS WIRE)--Starbucks Corporation (NASDAQ: SBUX) announced that Kevin Johnson, president and chief executive officer, intends to retire after a 13-year tenure at the company, including the last five years as ceo. Johnson will transition from his current role on April 4, 2022, and will continue to serve as a Starbucks partner (employee) and special consultant to the company and Board of Directors through September. The Starbucks Board of Directors has been engaged in continuous ceo succession planning, assisted by Russell Reynolds Associates since 2021, and anticipates selecting a new leader by the Fall. To ensure seamless stewardship of the company until a permanent successor is named, the Board has appointed Howard Schultz as interim chief executive officer, effective April 4, 2022. Schultz will also rejoin the company's Board of Directors.

"When you love something, you have a deep sense of responsibility to help when called. Although I did not plan to return to Starbucks, I know the company must transform once again to meet a new and exciting future where all of our stakeholders mutually flourish"


"On behalf of the entire Board, I want to express our sincerest thanks to Kevin for his leadership of Starbucks. Kevin and the entire executive team stepped up to the challenge of the pandemic and navigated one of the most difficult periods in modern history. The economic certainty provided to partners during the early months of the COVID shut down, as well as during mandatory quarantines, underscores our core values and will be an enduring legacy for the company. During Kevin's tenure, Starbucks scaled an industry leading digital offering spanning nearly 45 million Starbucks Rewards members in the U.S. and China," said Mellody Hobson, Independent Starbucks Board of Directors chair.

Building on the rich heritage of the company, Johnson established the People Positive, Planet Positive and Profit Positive framework that seeks to create a better world for Starbucks partners, farmers, customers and the communities it serves. He expanded the company's reach through the Global Coffee Alliance with Nestlé, which now operates in nearly 80 markets, and established and executed the Growth at Scale agenda that significantly increased shareholder value.

"A year ago, I signaled to the Board that as the global pandemic neared an end, I would be considering retirement from Starbucks. I feel this is a natural bookend to my 13 years with the company. As I make this transition, we are very fortunate to have a founder who is able to step in on an interim basis, giving the Board time to further explore potential candidates and make the right long-term succession decision for the company," said Kevin Johnson. "I have enjoyed every minute of the job and am proud of what we have achieved together. It has been an honor to serve the 400,000 Starbucks green apron partners around the world and I want to thank them for their service, resilience and optimism."

Hobson and Johnson will provide an update to shareholders during the 2022 Starbucks Annual Meeting of Shareholders webcast later today. The Board of Directors has formed a working committee to oversee the ceo search process which is ongoing and yielding a strong slate of potential candidates.

As the company's founder and architect of its culture, the Board of Directors believes Schultz is singularly qualified to serve as interim ceo until a new leader has been identified. In addition to the day-to-day management of the company, Schultz will participate in the search process and help onboard the next ceo.

"For 50 years, Starbucks has been relentlessly focused on exceeding the expectations of our people and our customers, while delivering best-in-class financial performance," said Hobson. "As the company navigates the aftermath of the pandemic and socio-economic forces impacting the lives of all our stakeholders, Howard will reinforce the company's culture, underscoring the organization's commitment to innovating and executing on our core purpose and reason for being: to inspire and nurture the human spirit—one person, one cup and one neighborhood at a time."

Schultz built Starbucks into one of the world's most recognized and respected businesses, a company committed to strengthening communities through human connection and innovation. Under his leadership from 1987 to 2018, Starbucks grew from 11 stores with 100 partners to more than 28,000 stores in 77 countries. As ceo, he redefined the role and responsibility of a publicly held company, pioneering programs like comprehensive healthcare, stock ownership and free college tuition for full and part-time employees. During Schultz's tenure, Starbucks stock price gained 21,000% from the time of its initial public offering in 1992 until he stepped down as executive chairman in 2018.

"When you love something, you have a deep sense of responsibility to help when called. Although I did not plan to return to Starbucks, I know the company must transform once again to meet a new and exciting future where all of our stakeholders mutually flourish," said Schultz.

As interim ceo, Schultz will focus on setting an innovation framework, while also coaching and onboarding the next permanent ceo of Starbucks. "Our success is not an entitlement. We must continue to earn the trust of our people and our customers every day by how we deliver the Starbucks Experience, how we treat each other and how we act as a responsible community member and corporate citizen. With the backdrop of COVID recovery and global unrest, it's critical we set the table for a courageous reimagining and reinvention of the future Starbucks experience for our partners and customers," commented Schultz.

Schultz is volunteering his time as interim ceo to Starbucks and will receive $1 of compensation.