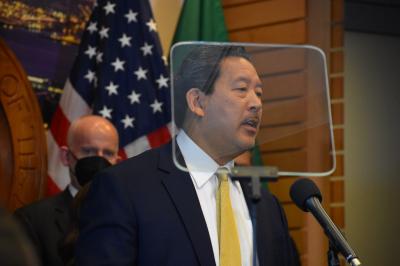 Seattle — Today, Seattle Mayor Bruce Harrell announced an Executive Order to support the Ukrainian community in Seattle and in Ukraine. The order will direct City departments to take action to assist communities impacted by the unjustified and violent invasion of Ukraine.

"Seattle stands with our Ukrainian neighbors, immigrant community, and the people of Ukraine. Our hearts break for the innocent lives lost and irreparably harmed by this senseless military invasion. In the strongest possible terms, we condemn the Russian government's unprovoked aggression," said Mayor Harrell. "One Seattle means a commitment to supporting our neighbors in need — and this Executive Order reflects the urgency of this moment and the leadership Seattle must provide. The City of Seattle will continue to meet with Ukrainian community leaders and groups to listen and to plan further action during this extraordinary hardship."

Mayor Harrell met with the Honorary Consul of Ukraine Valeriy Goloborodko and local Ukrainian community on February 28, 2022, to reiterate Seattle's support for Ukraine and to discuss the immediate and long-term steps to stand with Ukraine.

The City of Seattle will take action to support the Ukrainian community which may include, but are not limited to, legal, language, mental health, and financial assistance for immigrants and refugees resettling in Seattle. This work will be led by the Seattle Office of Immigrant and Refugee Affairs with assistance from the Human Services Department and Office of Economic Development.

The City's Office of Intergovernmental Relations will support this work by leading coordination with regional, state, and federal partners. This includes linking local Ukrainian community organizations and regional and federal partners to help transfer medical and humanitarian supplies to organizations in Ukraine and European nations serving Ukrainian refugees; convening regional cities for information sharing and coordination of support resources; and, working with the Office of Economic Development exploring opportunities for future sister city connections, trade and business partnerships, and relationships of city diplomacy with Ukraine.

The City of Seattle will also take action to identify and end any contracts the City has with Russian state institutions or major corporations. This work will be led by the City's Department of Finance and Administrative Services.

With the burdens of the crisis falling on communities not only of Ukrainian national origin, the order acts to support all refugees impacted by this crisis, including students and those of African, Asian, and Mideast descent living in Ukraine.

"Through this Executive Order, the City of Seattle is responding to our Ukrainian community's calls for support with a commitment to action," said Mayor Harrell. "And for Russian people protesting this invasion despite the risk of arrest, imprisonment, or worse, we stand with them too and against harassment, threats, or acts of violence toward Seattle's peaceful Russian immigrant community."

"Ukrainians are inspiring the world in their defense of freedom. Our country can empathize with the Ukrainian struggle. Our family members, our ancestors, have fought and died to protect our land, sovereignty, and people from foreign invaders," said City Council President Debora Juarez. "On a human level, we can all relate to the desire to protect our children and defy the forces that jeopardize our people's survival."

"Seattle will continue to aid the Ukrainian people as they defend their country. Seattleites stand ready to welcome the women, children, and elderly seeking refuge in Seattle. We will do our part to hold those responsible for these crimes against humanity accountable. Because light will always triumph over darkness, freedom will never be extinguished, and our resolve to defend democracy around the globe will never be broken," said Council President Juarez.

As the invasion of Ukraine continues to develop, the City of Seattle will update plans to support Ukrainian people here and abroad. Seattle is committed to being a welcoming and inclusive city and will take all available steps to assist Ukrainian friends and neighbors.