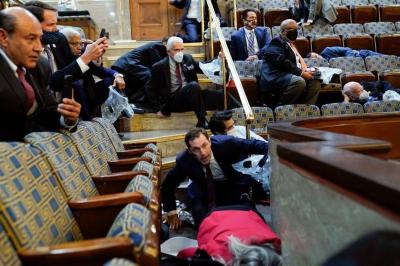 WASHINGTON, DC - Rep. Adam Smith (D-Wash.), Chairman of the House Armed Services Committee, today issued the following statement in the midst of the protest that has overrun the Capitol campus during the proceedings to certify the 2020 general election results:

"The assault by pro-Trump extremists on the United States Capitol is a criminal act aimed at ending our democracy as we know it. The Capitol campus must be cleared of these extremists as soon and as safely as possible.

"I have spoken with Department of the Defense leadership - specifically Chairman of the Joint Chiefs of Staff, General Mark Milley, and Secretary of the Army Ryan McCarthy - who are now working with the District of Columbia government, the Department of Justice, and Capitol police to restore order to the Capitol and allow members of Congress to safely certify the election results, as is our constitutional obligation.

"President Trump and his enablers are directly responsible for the despicable acts at our nation's Capitol that we all have witnessed today. The President incited and encouraged this riot. He has lied repeatedly, as have his enablers in Congress and elsewhere about this election. They do not believe in democracy. They believe in retaining power by any means necessary. All Americans who believe in the rule of law and our Constitution must clearly and unambiguously hold these people accountable for their actions.

"Order will be restored. Congress will do its job. This election will be certified, and Joe Biden will, as he was duly elected to do, take office as our next President on January 20th."