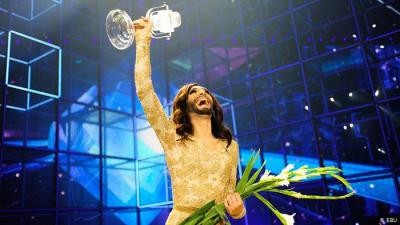 Surely it's got to be Eurovision, the 65-year-old song contest that draws nearly 200 million viewers around the globe annually. It's the world's largest non-sporting TV event and the longest running annual TV music competition - but nearly unknown in the United States.

But that's not the case among its many LGBT fans, here and around the world, for which the glitzy competition is one of the year's highlights. They form the lion's share of fan clubs, and are more and more visible in the televised audience, as are their rainbow flags.

On stage, too, the Eurovision Song Contest itself has gotten more visibly Queer in the last quarter-century, especially after Paul Oscar of Iceland became the first out contestant in 1997, and Dana International won for Israel in 1998 as an openly Transgender woman, igniting joyous celebrations - and not a little controversy - back home.

Since then, numerous Queer contestants have participated (either before or after coming out), and some have even won - such as Katrina (Leskanich) & the Waves, who emerged victorious in 1997 for the UK, before she came out; Serbia's Marija `erifovic, who won in 2007, also before coming out; Conchita Wurst, the bearded drag persona of openly Gay Thomas Neuwirth, who brought home the trophy for Austria in 2014 with "Rise Like a Phoenix" and made an appearance in last year's Eurovision: Story of Fire Saga; and 2019's openly Bisexual victor, Duncan Laurence of the Netherlands, whose "Arcade" recently entered the American charts and has become a bit of a TikTok sensation.

Drag has also been featured by the likes of Slovenia's campy air stewards in 2002, Denmark's glittering, feathery "Drama Queen" in 2007, and Ukraine's Verka Serduchka's indelible, wacky performance in 2007, which reached second place and has since become a classic.

Same-sex affection has begun to make an appearance as well, such as the girl-on-girl kiss by Finland's Krista Siegfried in "Marry Me" in 2013, and the stage show for "Together" by Ireland's Ryan O'Shaughnessy in 2018, which portrayed two men in a relationship.

This growing Queer visibility has led to some backlash, especially in the Eastern Bloc. Increasingly illiberal Turkey and Hungary no longer participate, and LGBT visibility has been cited or rumored, respectively, as one of the reasons. China, which broadcast the competition for years, censored the abovementioned Irish act in 2018; the network's rights were terminated by the European Broadcasting Union, which puts on Eurovision and requires the show to be broadcast in its entirety.

This year, a number of out Queer performers participated in the contest, held in Rotterdam in the Netherlands. Ireland was represented by Lesley Roy, who recently married her wife; last year she performed an explicitly Queer anthem, "Story of My Life." Germany's Jendrik ("I Don't Feel Hate") and North Macedonia's Vasil ("Here I Stand") are openly Gay, as was the host country's representative, Jeangu Macrooy, who sang "Birth of a New Age."

Moreover, Tusse from Sweden presented as very gender-fluid in silk and jewels, and Russia's Manizha drew flak for, among other things, her LGBT friendliness. Plus, one of the broadcast's four hosts, Nikkie de Jager, is openly Transgender - and a YouTuber (known as NikkieTutorials) with nearly 14 million subscribers.

So if you want to dive into the fabulousness that is Eurovision - the contest that brought fame to the likes of past winners ABBA and Céline Dion, and has featured entries by greats like Cliff Richard, Olivia Newton-John, and Bonnie Tyler - you can see this year's show free on demand on Peacock [peacocktv.com].

Then start gearing up for next year's Queer-friendly musical extravaganza!

A YouTube playlist of the artists and songs mentioned here can be found at https://bit.ly/3oQfeJ9.