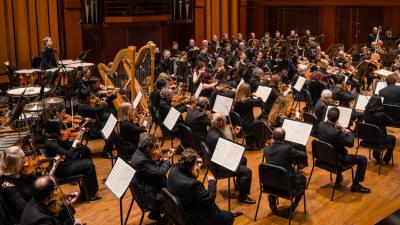 SEATTLE - Seattle Symphony Music Director Thomas Dausgaard and President and CEO Krishna Thiagarajan [have] announced a return to live concerts for the 2021-22 season. The new season brings spectacular Opening Night, Masterworks, and Untuxed series concerts to Benaroya Hall; season programming for additional series will be announced this spring and summer.

When COVID-19 hit in early 2020, the entire world felt the impact and the arts sector was no exception. For the Seattle Symphony, the health and safety of its community, musicians, and staff was the top priority, prompting the immediate closure of Benaroya Hall. Holding steadfast to its commitment to serve the community through music, the Symphony quickly turned to offering free live broadcasts, building out a variety of regular free programming for the remainder of the season, featuring recordings of past concerts as well as new performances, often filmed from the musicians' own homes.

Despite new setbacks, the Seattle Symphony launched the current season digitally in September 2020 with the creation of a new streaming service, Seattle Symphony Live, which has since grown to nearly 4,000 subscribers. With viewers from Washington to New York, and Norway to New Zealand, Seattle Symphony Live has broadened the Symphony's reach to audiences around the world. Through the implementation of meticulous safety measures and health protocols, the Symphony resumed live concert production this season with physically distanced musicians joined by exceptional guest artists on the Benaroya Hall stage. As the world continues to navigate the ongoing pandemic, the Seattle Symphony carries the experience, diligence, and momentum of the last year to launch a new season with optimism.

"This is our long-awaited chance to be together after such long isolation and again experience live symphonic music with the magnificent Seattle Symphony," [said] Music Director Thomas Dausgaard. "This special season, we are so excited to throw open our doors and share the authentic and engaging sound of the full symphony orchestra. Diversity has been a driving principle in how we've conceived this season's programs, and we're both proud and excited about the result. What does the time we live in sound like? You will hear brand new music, written especially for us and for you from a rich and diverse range of composers, put in context of some of the greatest symphonic works of all time - music we have been longing to play and hear live again. Music has the power to lift us up, to touch us and uniquely make us experience the power of the moment. I look forward to sharing with you the thrill of live music in performances of great symphonic works from the last 400 years to today!"

"We look to the new season with extreme gratitude for our community who stood by us and supported us throughout the past year," said President and CEO Krishna Thiagarajan. "It's shown us that music is an essential part of our lives. To gather with audiences again after being apart so long, this season is so much about our connection to the people and world around us. With that in mind, the Seattle Symphony launches the 2021-22 season for our community, and we hope to see everyone back at Benaroya Hall in due course."

Season highlights
Thomas Dausgaard's Sibelius Cycle to feature pairings with world premieres of new commissions
In his third year as music director, Thomas Dausgaard and the Seattle Symphony embark on an exciting two-year Sibelius Cycle, with Dausgaard bringing his Nordic roots and unique insight to exploring the iconic Finnish composer's music. Over the course of two seasons, the Cycle will bring to audiences all Sibelius' symphonies including the rarely performed, original versions of Sibelius' Fifth Symphony and Violin Concerto. The symphonies will be presented in the context of a series of new Seattle Symphony commissions, where the leading composers of today are asked to relate to Sibelius's works. Each new work will receive its world premiere alongside the Sibelius symphony it responds to.

The Sibelius Cycle begins February 3-5, 2022, when Dausgaard leads the orchestra in Sibelius's Symphony No. 1 paired with composer Ellen Reid's response to Sibelius in a new work to be premiered. On April 7-9, the Cycle's second program pairs Sibelius' Symphony No. 2 with a new work by Angélica Negrón, along with guest violinist Isabelle Faust bringing to life the original version of Sibelius' Violin Concerto with Dausgaard at the podium.

On February 4 and April 8, audiences will also have the chance to experience these programs in a more casual setting, with Dausgaard as part of the Symphony's Untuxed Series, which presents mainstage programming in a pared-down, relaxed format. The Sibelius Cycle will be completed in its second year with Symphonies Nos. 3-7.

World premieres and new commissions
Regarded as an orchestra "avid for new music" (The New Yorker), the Seattle Symphony continues its steady support for new works and current composers in the 2021-22 season's Opening Night and Masterworks Season with six commissions, four world premieres and two US premieres.

In addition to the new works by Reid and Negrón commissioned as part of the Sibelius Cycle, the Seattle Symphony is proud to present in the upcoming season: the US premiere of Francisco Coll's Violin Concerto, performed by violinist Patricia Kopatchinskaja; the world premiere of Reena Esmail's RE|Member, which will open the Symphony's season on September 18; the world premiere of Hannah Lash's The Peril of Dreams, a commissioned work for two harps with the composer herself debuting the work alongside Seattle Symphony principal harp Valerie Muzzolini; the US premiere of Simon Steen-Andersen's Piano Concerto, a provocative work that interweaves the sound and video recording of a grand piano falling eight meters to a concrete floor and its intricate dialogue with the live orchestra; and a new co-commissioned work by Joel Thompson.

In Spring 2022, the Symphony is set to perform George Walker's Lyric for Strings and Folksongs for Orchestra, also conducted by Dausgaard; Adolphus Hailstork's Epitaph for a Man Who Dreamed, conducted by Dalia Stasevska; and William L. Dawson's Negro Folk Symphony, conducted by Roderick Cox.

Other highlights of the season include works by William Grant Still, Kaoru Ishibashi (Kishi Bashi) and John Adams.

Kishi Bashi: EO9066
2022 marks the 80th anniversary of Executive Order 9066, which saw the internment of thousands of innocent Japanese Americans during the Second World War, indelibly changing their lives and the Pacific Northwest region - the effects of which are still felt today. On January 27-29, 2022, in honor of those affected by this historical injustice, the Seattle Symphony presents Kaoru Ishibashi's Improvisations on EO9066, with Music Director Thomas Dausgaard conducting. Dausgaard will be joined onstage by the Seattle-born composer, who performs as Kishi Bashi.

Improvisations on EO9066, which premiered in 2018, features Kishi Bashi on violin and vocals and explores the tragedy of Japanese American internment in a genre-bending, multimedia concert experience. The Symphony's presentation will be incorporated with other forthcoming community collaborations to contextualize and examine the impact of this moment in history.

Morlot conducts Messiaen: Des canyons aux étoiles...
Seattle Symphony Judith Fong Conductor Emeritus Ludovic Morlot returns to conduct Messiaen's Des canyons aux étoiles... ("From the Canyons to the Stars..."). Commissioned to celebrate the bicentenary of the United States' Declaration of Independence, the monumental work is a twelve-part orchestral suite. Witness to the grandeur of Utah's Bryce Canyon and Zion National Parks while preparing for the commission, Messiaen was particularly inspired by the natural beauty of the American West, from its canyons to its moonscapes. So struck was the composer at the time, that he regarded the geographical and astronomical scenes as religious work, divine in their wonder.

The Seattle Symphony performs the entire work on June 2 and 4 with Steven Osborne as guest pianist. The presentation integrates an impressive visual experience created by Deborah O'Grady, a video artist who followed Messiaen's footsteps through the canyons he traveled, bringing to audiences photography and videography that documents the stunning scenes Messiaen's music paints.

Special performances: Avi Avital, Wayne Marshall, and John Adams
Grammy Award-nominated mandolinist Avi Avital returns to Benaroya Hall as soloist and conductor on January 13-16. The electrifying artist leads the orchestra in Vivaldi's The Four Seasons and is joined by soprano Núria Rial for traditional songs inspired by the canals of Venice.

On June 16-19, Wayne Marshall conducts the Symphony from the piano in an all-Gershwin program that affectionately celebrates the glamor of the 1920s. Marshall is set to perform Gershwin's Concerto in F, Second Rhapsody for Piano & Orchestra and An American in Paris with the orchestra.

John Adams is set to conduct the Seattle Symphony on January 6 and 8 in a program of his own works. The prolific American composer will be joined by pianist Jeremy Denk and saxophonist Timothy McAllister in a concert that features Short Ride in a Fast Machine, Must the Devil Have All the Good Tunes? and City Noir.

Music Director Thomas Dausgaard will be joined by: violinist Patricia Kopatchinskaja, who reunites with Dausgaard on October 7 and 9 for the US premiere of Francisco Coll's Violin Concerto; pianist Nicolas Hodges for the US premiere of Simon Steen-Andersen's Piano Concerto on November 11-13; composer Hannah Lash at the harp for the world premiere of her own work, The Peril of Dreams, on November 18 and 20; Kishi Bashi for Improvisations on EO9066 in January; pianist Garrick Ohlsson performing Stenhammar's Piano Concerto No. 2 on February 3 and 5; tenor Russell Thomas on February 10-13 in a program featuring works by Walker and Mahler's Das Lied von der Erde; violinist Isabelle Faust performing the original version of Sibelius' Violin Concerto for the second concert of the Sibelius Cycle in April. Dausgaard will also present Verdi's Requiem with the Seattle Symphony Chorale on June 16-19, 2022.

For a complete list of artist and repertoire listings, please visit the Seattle Symphony Press Room.

Health and safety
The Seattle Symphony's top priority remains the well-being of its audience, staff, and musicians. The organization is carefully planning for the safe return of audiences to Benaroya Hall. Comprehensive health and safety measures have been implemented in the current season to enable continued concert operations, including controlled air filtration, rigorous cleaning procedures, health screening protocols, and more.

The Symphony recognizes that some patrons may not feel comfortable attending concerts in person for some time. Select concerts will be available through Seattle Symphony Live, the Symphony's streaming service.

Additional guidelines for in-person concert attendance will be announced as the upcoming season approaches. The Seattle Symphony looks forward to welcoming audiences back to Benaroya Hall soon.

Led by Music Director Thomas Dausgaard, the Seattle Symphony unleashes the power of music, brings people together, and lifts the human spirit. Recognized as one of the "most vital American orchestras" (NPR), the Seattle Symphony is internationally acclaimed for its inventive programming, community-minded initiatives, and superb recordings on the Seattle Symphony Media label. With a strong commitment to new music and a legacy of over 150 recordings, the orchestra has garnered five Grammy Awards, 26 Grammy nominations, and two Emmy Awards and was named Gramophone's 2018 Orchestra of the Year. The Symphony performs in Benaroya Hall in the heart of downtown Seattle from September through July, reaching over 500,000 people annually through live performances and radio broadcasts.

Courtesy of the Seattle Symphony