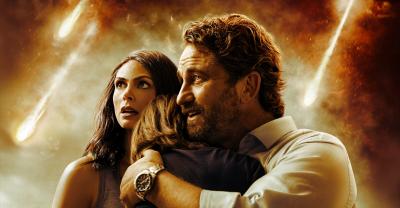 If Roland Emmerich's outlandishly overblown 2009 hit 2012 and Roar Uthaug's 2015 critical darling The Wave got together and had a baby, it would probably look a lot like Ric Roman Waugh's (Angel Has Fallen) goofy if grounded Gerard Butler disaster epic Greenland. Chris Sparling's (Sea of Trees) efficient script strips this end-of-the-world thriller down to its barest essentials, keeping things focused on one family's perilous journey to survive while eschewing many of the typically cartoonish tropes the genre is known for.

On his son Nathan's (Roger Dale Floyd) birthday, structural engineer John Garrity (Butler) receives an alert claiming to be from the federal government. He, his estranged wife Allison (Morena Baccarin) and his little boy are to immediately leave their home, head to a nearby airport and be processed for emergency evacuation to an undisclosed location.

Initially thinking this must be a bad joke, the family quickly changes their tune when they see the breaking news. A fragment from a passing, initially thought to be harmless comet has made impact and the devastation is massive. Worse, it's only a small taste of what is to come, larger pieces, including one which is being dubbed as a potential planet killer, all going to be hitting the planet over the coming days.

It's not exactly shocking where things go next. For a variety of reasons which are essential to keep tensions high and the plot purposefully convoluted, Allison and Nathan will not make their scheduled flight and John will only find that out seconds before all heck breaks loose. Separated, the family will race to Allison's father's farm to hopefully reunite, encountering several increasingly perilous obstacles along the way. Once brought back together, they will learn the location of where the government is relocating everyone and will make one final dash to get there before the comet's debris makes the surface of the Earth a desolate unlivable nightmare.

What is startling is how effective all of this turns out to be. Sparling's screenplay keeps the focus on the family and their relationships. When they are apart, we root for them to get back together. Once that happens, we find ourselves emotionally invested in their fight for survival. These are flesh and blood human beings and not stock caricatures typically found in big-budget Hollywood disaster flick tentpoles. While inhabiting characters well inside their respective wheelhouses, Butler and Baccarin are still strong in their roles, the former carrying things with the requisite gruff yet compassionate gravitas the story requires.

I think I was sold on the picture early on. There's a magnificent scene of the Garritys leaving for the airport where one of their neighbors pleads for them to take their daughter, Nathan's best friend, with them. It's a heartbreaking sequence infused with a stark, unvarnished honesty these types of genre pictures typically avoid like the plague. Waugh plays down the inherent sensationalism of the moment and instead focuses on the tragic emotional truths driving John's decisions, making the impact as they drive away all the more palpably upsetting.

It sets a tone for how things will play out from that point forward. Much like The Wave, it's easy to become absorbed in even the more outlandish set pieces mainly because I felt so connected to the family. Granted, as we're dealing with the end of the world, it's not like Waugh eschews special effects-fueled spectacle and comically excessive visual pyrotechnics entirely. Not at all. But no matter how silly it all gets the reality of the situation for the family is rarely inauthentic, making the ridiculous stupidity even easier to digest.

Scott Glenn pops up in a key supporting role near the end of the second act, while composer David Buckley (Jason Bourne) provides a suitably atmospheric score overflowing in adrenaline. The effects work is solid if not spectacular, and while the frenetic finale works, it's also a bit on the anticlimactic side if I'm being perfectly honest.

Not that it matters much. Greenland is a winner. Waugh has delivered one of the better major studio disaster epics I've seen in ages, imbuing it with enough heart, empathy and compassion that watching it in a 2020 featuring far too much actual grief, tragedy and despair ends up being satisfactorily worthwhile, a surprising turn of events I can't say I saw coming.