Optimism and hope: Chatting with Summerland writer/director Jessica Swale about her heartfelt debut 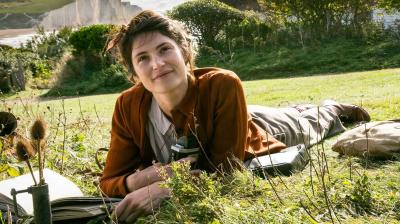 Now out on Blu-ray, DVD, digital download and available to stream on Hulu, writer/director Jessica Swale's Summerland is one of the best films I've seen in 2020. An empowering, emotionally empathetic WWII British home front melodrama, this story moved me to honest tears multiple times. Featuring superb performances from Gemma Arterton, Gugu Mbatha-Raw, Tom Courtenay and spellbinding young newcomer Luca Bond, it's rare a motion picture has enraptured my soul with this much joy.

The plot follows Alice (Arterton), a reclusive and cantankerous writer living in a small village who is currently writing a book debunking local folklore. She wants to find a scientific reason for all that's perceived as otherwise unexplainable, and she'd rather not be interrupted by any of the local townsfolk.

All of which makes the arrival of Frank (Bond), a 14-year-old evacuee from London who the British War Office has inexplicably sent to live with her, something of an unexpected annoyance. While the village schoolmaster Mr. Sullivan (Courtenay) attempts to find a new situation for the boy, Alice and Frank decide to make the best of their current situation. In the process, both discover they have far more in common than they originally estimated, forming a tight-knit bond that catches each of them by surprise.

An award-winning play writer, Summerland marks Swale's debut behind the camera. I had the opportunity to briefly chat with the filmmaker about her film. Here are a few edited excerpts from our conversation:

Sara Michelle Fetters: You've had incredible success as a playwright and as a theatrical director. What was the impetus to write this script as a motion picture? What prompted you to make this leap?

Jessica Swale: Good question! It was quite an interesting process. I had been writing for movies a bit already. I had been adapting plays that I'd written to the theater for the screen, but this was the first time that I had the opportunity to write something from scratch for the cinema. That was such a pleasure. I was on a bursary award from BAFTA. They were trying to encourage theater writers to write original screenplays.

It was an opportunity to think about what cinema could be and why I would want to write for the cinema. This led me to think about how much you can do in an imaginative landscape and to ask, what would I want to see in the cinema? I didn't want to explore everyday daily life. I don't want to watch something too close to reality. I wanted to escape. The theme of magic in the everyday world came from that thought. I wanted to see things that were a bit bigger than real life and allowed me to explore the "what if."

Sara Michelle Fetters: Yet you examine those magical elements in a very literal, almost fact-driven way that is really compelling. You get to see all these little pieces start fitting together. Was that always by design?

Jessica Swale: It was. I began writing and it sort of fell out quite naturally. Of course, once you have the story, the more that you write, the more you go back and you edit and you add details, but it was really important to me that Alice was somebody who was interested in magic. I think in earlier parts of her life she might've liked to believe in it. But then she was so cut off from the optimistic possibilities of allowing herself to imagine anything other than this grim reality of life. She's so disappointed by the events of her past and so hurt. It was important to me that she became a cynic.

What I loved was the science of that, the fact that there should be something in this story which is the sort of treasure map, and then Alice and Frank trying to unpack the folklore, put it all together. There's something about the investigation of that. I wanted their board in the film to appear like a crime notice board where you're trying to make connections between this place and that place in order to solve the mystery.

Sara Michelle Fetters: Talking about connections, I commented to somebody immediately after watching the movie that some part of me thinks that I should maybe hold it against this movie that it embraces some of its melodrama, that it embraces some of its coincidences. Except, you did such a great job connecting everything that by the time I got to the end it all made perfect sense. You made it so that I couldn't be angry.

Jessica Swale: [laughs] Whew! That's good. I'm sure some people will still think it's too convenient, what happens, but this is a movie that is about possibility, and one of the elements of that was that, yes, there are things that happen that are unlikely. But that's what makes it interesting! Coincidences do happen. To me, there isn't that much coincidence in it. Even with the twist, when I went back and sorted that through and worked out the reality, I verified all the pieces fit.

Suffice it to say, what I enjoy as a writer is when things fall out of the story that I don't expect. When I'm surprised by what characters do. I write quite subconsciously in my very early drafts. I didn't know that some of these twists were going to happen until I was literally in that moment writing! For me, I know that if I am surprised by what characters do, then the audience will be, too.

Sara Michelle Fetters: I guess the reason that it works so well for me is that much like say Joe Wright's Atonement or Lone Scherfig's Their Finest, which also had Gemma in it, I could go back and watch it a second time and put the pieces together. When I went back and watched your film a second time, I could use my analytical eye and see all of these connections. They aren't coincidental. You've laid the groundwork.

Jessica Swale: Right. That was one of the joys of writing. Once I had discovered the twists for myself, I then went back and layered them all in knowing full well that there were things I wanted to hint at. Tying current events between items, objects and colors that we see in the flashbacks, allowing all of this to somehow creep very subtly into Alice's experience once Frank arrives. It's just lacing in tiny little hints. I love watching a film with a twist for a second time and trying to spot all those little hints and clues that I missed the first time.

Sara Michelle Fetters: What was that like for you to be there as the filmmaker and to realize you could put in those clues, you could hint at these different things that are happening to these characters in a very visual way for audiences to pick up on in a way that's typically not possible when you're directing for the stage?

Jessica Swale: That was such a joy for me. The level of detail that you can work at with a creative team visually is so enjoyable. I really enjoy the visual elements of working in the theater, but as a writer in the theater, your job really is the dialogue. As a writer in film, you're a "wrighter." Wright. In terms of the wright, like a wheelwright, someone who makes the wheel, not someone who writes just the words. As a screenwriter and a director, you have more agency to get involved with the visual picture. It's a very happy place for me to have landed.

Not that I'm turning my back on the theater. I am actually writing for the theater at the moment, too.

Sara Michelle Fetters: The foundation here, obviously, is this blossoming friendship-slash-not-so-much-mother-son-but-something-close relationship that ends up developing between Alice and Frank. When you were filming, when did you know that Gemma and Lucas had it, that they were bringing to life this relationship in a way that equaled, maybe even surpassed, how you wrote it?

Jessica Swale: I knew before we started filming. I was pretty convinced when I first met Lucas. I auditioned him several times. I really wanted to get the casting right because the movie rides on Frank. Lucas didn't have a lot of experience compared to some young actors. He's done a little bit of television but he hadn't ever played the lead in a movie, or been in a movie, so it was a leap of faith to trust him. I have thankfully worked with some young actors before, but it still felt like a risk.

But I had so much faith in him. He's so confident and intelligent. So curious and willing to throw himself into things. I was so impressed by him. I made sure that he met Gemma in advance. As soon as they met, I knew straight away they'd be perfect together. It was such a joy to watch the development of their friendship and the evolution of their working partnership. Gemma was so generous with her time on set, taking him under her wing and teaching him as much as she could. They really sparked, and it meant that the chemistry they have on the screen didn't need to be falsely created. They were naturally like that.

Sara Michelle Fetters: We're running out of time so I'm going to split my last question into two parts.

Jessica Swale: Go for it.

Sara Michelle Fetters: The first part of my question is, how crazy is it that your two stars, Gemma Arterton and Gugu Mbatha-Raw, both played the same character in your hit play "Nell Gwynn," and here you have them playing against one another in, not to give anything away, an increasingly close relationship?

Jessica Swale: Good double question, which is definitely two questions. [laughs] To answer the first half, it was mere coincidence in terms of casting because Gugu is one of my very, very oldest friends. We did our very first job together. Gemma, when she played Nell, I got to know her and we became fast friends and are now regular collaborators. Now we can't see enough of each other, and we're even working together on our next secret project, which is the first time Gemma will be writing something herself. I'll be producing as well as directing and co-writing, so that's exciting. But it was so lovely to work with two people who I know and trust so well. To have them both in my first feature? That was such a privilege.

In terms of what I would like people to take away, it's so important to me that the stories we tell reflect the real diversity and wideness of our community and how brilliant human beings can be. To showcase how important it is to accept everybody for who they are regardless of sexuality, regardless of race, regardless of gender, regardless of their attitude, how cranky they are or what they want from their lives.

It's one of my aims as a filmmaker, to tell those stories with a proper moral at their heart and that brings us some optimism and some hope. I am not interested in making big and depressing work. I only want to make work which has a hopeful theme running through it because I feel like part of what stories can do is to help elevate people. To uplift people and to give people hope in dark times, particularly in regards to something like what we've all experienced this year. For me, there hasn't ever been a more apt time for this movie. If people feel a little bit more hopeful and joyful and wanting to celebrate life and love a little bit more afterward, then I feel like that would be the perfect outcome.