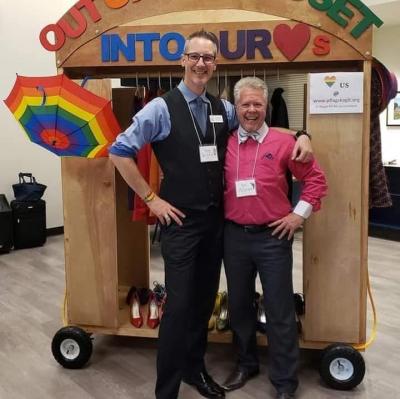 Drew and I connected in 2017 when I ran for office in the city of Seattle, and was looking for a campaign manager. We had briefly met before at LGBTQ+ events but had never really had any at-length conversations. He met me for coffee to discuss my campaign. We became fast friends and found that we had a great deal in common; we both had a drive to make a difference in the world, we both worked to eradicate shame around gender and sexuality, our dark-wicked at times-sense of humor, and our common love for both drag performers and sports. We also both loved being uncles. We had a joke that he was a "gunkle" (gay uncle) and that I was a "trunkle" (trans uncle). He was a unique, highly intelligent, driven advocate for those of us who do not fit into the norms of our day.

In 2019 I got a download from the universe-some might call it a vision. I saw many versions of masculine people gathered together for the purpose of healing and eliminating toxic masculinity and creating a healthier model of masculinity for all of us. I saw cis guys, trans and non-binary folks, straight, gay, bi, pansexual guys, black, brown, white, native, masculine folks, many religious and ethnic backgrounds, all at the table doing this work together. The first person that I shared this vision with was my dear friend and fellow agent of change, Drew. I shared this vision with him and asked if he was interested in working on this project with me. He gave me a big "Hell yes!" We then embarked on the journey of forming a nonprofit called "Positive Masculinity." We spent hours planning and sharing with one another how toxic masculinity had affected our lives. Then we started a once-a-month, face-to-face "Positive Masculinity" meeting, where we invited masculine folks to join us to do this deep, inner work. It's still going strong, and the work is incredibly inspiring. We also began writing a book on the subject, for which we have created many recordings. We have had some of it transcribed, and I will get that task finished. Drew and I recorded our personal experiences with toxic masculinity to where we are now, as well as chapters on how to heal from that, and strategies to make it better. Having grown up in the small town of White Salmon and knowing he was gay from a very young age, Drew lived through bullying because he was different. These experiences helped drive him to make the world a better place for others who do not fit in the majority. Drew's declining health brought his work on the book to an end a few months ago. I will finish this book, dedicating it to my friend, fellow advocate and co-founder.

Drew was also a powerful advocate for the work of PFLAG. He served on the Washington State Council as both President and VP for different terms, and as the Pacific Northwest Regional PFLAG Director. During that time he led the charge in creating a virtual regional conference, helping to grow the number of PFLAG chapters in the region, helping existing chapters grow and flourish, and was a part of creating and running several state conferences. He was also chair of our state PFLAG advocacy committee and did an incredible job of spreading the PFLAG message of love and inclusion across our state. He got me involved with the Washington State Council for PFLAG as well. I will have fond memories of carpooling with him to State PFLAG events, where we would blast Freddie Mercury music, as we tooled along singing our queer hearts out. He was extremely passionate about fighting for equality and protections for those in the LGBTQIA community, and put his whole heart and mind into it. In his spare time he also chaired the first-ever Tukwila Pride event. Last year, PFLAG National gave Drew the Morty Manford award-the LGBTQ+ Volunteerism Award.

Drew had an incredible creative side, which he used in many productive and fun ways. His longtime friend, roommate and creative partner, Andrew Tasakos produced the "Cooking with Cannabis' Bitsy Bates Show, which you can find episodes of on YouTube.

Drag Queens, cooking, cannabis, cocktails and a tall queen producer. Such fun. They last performed on the stage at Hempfest, together with a full-out cooking demo, along with their comical banter. Drew had a way wrangling drag performers, helping write scripts for them, in addition to creating posters and ads for performances. He loved this creative venture, and the whole atmosphere of drag shows which went right along with his advocacy work. He was constantly helping to make safe spaces for LGBTQAI folks to be themselves, share their talents, grow, and have fun.

Drew had a long, drawn-out battle with cancer; he was first diagnosed in 2012 and beat the odds many times. He battled two types of cancer, stayed fit and positive, and was open about his battle publicly in order to educate and help others going through illness. He became a patient advocate at the Cancer Research Institute, helping other patients stay positive and realize they could still contribute and live. He never let his illness define him, or get him down for long. He would always come back to the fact that he had too much to do in this world to spend time down about the obstacles before him. He touched the lives of many, and his spirit will live on in all that he touched.

"Drew Griffin was a force for good for many. Someone described him as "sweet" and I laughed! Drew was smart, devilishly funny, kind, generous and had as good of comebacks as anyone I've ever known. "Sweet" didn't come to mind as a description of him in the many years we volunteered together for PFLAG. I was blessed to have him as a colleague and a friend and the work we did together at the WSC laid the groundwork for a better, easier future for those who follow as we Move Equality Forward!
- Cooper - PFLAG WA State Council President"

"Drew led by example. He was a gentle warrior. His brand of advocacy was infectious. He drew people in to whatever issue he was working on. He was a beloved leader who could work across generations and other divides."
- Joshua Friedes - retired Equal Rights WA

"Drew had a powerful vision for how Washington residents could live and work with one another across all our differences. Everywhere my own advocacy work took me, he was there, bringing people together. The word 'resilient' doesn't even come close to describing him."
- Elayne Wylie Co-Executive Director of Gender Justice League