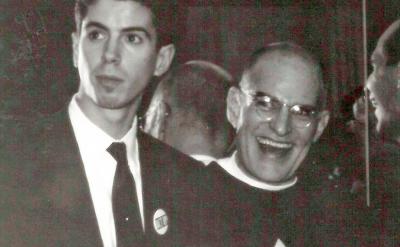 I was just a kid when I walked into my first ACT UP meeting, just weeks after Larry Kramer's movement-launching speech in March of '87. I hadn't heard about the speech. I didn't even know who he was. But I would hear of it soon enough. Larry's life became part of the steep learning curve I desperately climbed that year.

We were all kids, except for Larry, Maxine, and a few others. He even called us "my kids." I tried to grab a seat close to him at Woody's after Monday night meetings, where ACT UP's most committed members would stay up late, deconstructing the meeting, debating our future, and dishing the group's gossip over many beers.

Those moments were the happiest I've ever seen him. He was finally witnessing the community he dreamed of. He loved our youthful energy and picking our brains. For me and many others, Larry became a father figure, asking about our lives, setting us up on dates — my relationship and lifelong friendship with Kevin Sessums was because of Larry — and genuinely caring about our struggles and fears.

We forget that ACT UP was born six years into the crisis. Six lost years, as the country and its president, ignored a new virus that was slaughtering a community they despised. Larry told us to fight back. In short order, we guilt-tripped an entire nation of people and two Republican presidents to react. By 1990, the AIDS research budget at the NIH hit one billion dollars a year.

It was a movement that caused that sudden shift, but Larry was its spark. Those tax dollars resulted in treatments that keep 25 million people with HIV alive today.

When TAG split off from ACT UP in '92, our relationship took its first of many blows. But by then, we had too much shared history to turn our backs on. Too many meetings. Too many phone calls. Too many shared losses. A deep well of mutual respect set in. Even though we both came to view each other as deeply flawed, the respect remained.

He accused me of "destroying ACT UP," and for not being angry enough in the years since. I accused him of being woefully out of touch. By the early 90s, he was a broken record that's been skipping ever since. He never understood science, which became a prerequisite for effective AIDS activism. He was a borderline conspiracy theorist. The clarity of vision he had in the 80s turned into a blindness of sorts, especially around the remarkable progress younger LGBTQ Americans have fought for and won.

Even his early legacy became muddied for me over time. There were two Larry's back then. The first deserves every statute that gets built in his honor — the Larry who used anger to launch the two main branches of our community's AIDS response, the beautiful self-care response that Gay Men's Health Crisis valiantly built while the world looked away, and the activist response that forced that same world to look, and respond.

The second Larry was the moralist whose finger-wagging, like all finger-wagging, brought adulation from other moralists, but had no effect on the rest of us. AIDS was not a price we paid for finally building communities of freedom on both coasts. There have been only two sexually transmitted pathogens in all of human history that have killed in the millions — syphilis and HIV — and they hit us 500 years apart. AIDS was not an inevitable result of gay life in the 1970s. As an epidemiological event, it was simply bad luck.

To this day, gay men carry the added burden of a society that sexually shames us. Larry played a part in this. To be fair, most of this critique is inside baseball. To the larger world, Larry was our community's greatest advocate. He constantly told straight America that his gay brothers and sisters were the most beautiful people on earth. He pushed back against the hate directed at us like no advocate before him. Larry loved gay people, and spent his entire life fighting for us.

I just got off the phone with Tony Fauci. I broke the news to him via text earlier today. We're both surprised how hard this is hitting. We both cried on the call.

I've told Larry to fuck-off so many times over the last thirty years that I didn't expect to break down sobbing when he died. His husband David kept the recent hospitalization under wraps, not wanting to deal with a million phone calls. I found out only last week, and only after Larry was doing much better. As of Saturday, he was still improving. I only heard this morning that everything spiraled in the last 48 hours.

Larry's timing couldn't be worse. The community he loved can't come together — as only we can — in a jam-packed room, to remember him. We can't cry as one and hear our community's most soaring words, with arms draped on shoulders in loving support. Broadway has no lights to dim, which it surely would have.

Can we please do this next year?

Fuck, this hurts. I keep flashing back to those early ACT UP meetings. I put on a good show, always in mission-mode. But the more I've written about those years, the more I've remembered how scared I was — diagnosed when I was 24 years old. It was all bottled up, but I was terrified. Those meetings gave me the only hope I could find back then. Larry orchestrated the launch of ACT UP. He plotted with Eric Sawyer and others, planting calls for a new group during the Q&A after his speech.

Larry Kramer founded a movement, and I'm alive because of that. Millions more can say the same. All his faults fade away in the wake of our thanks.