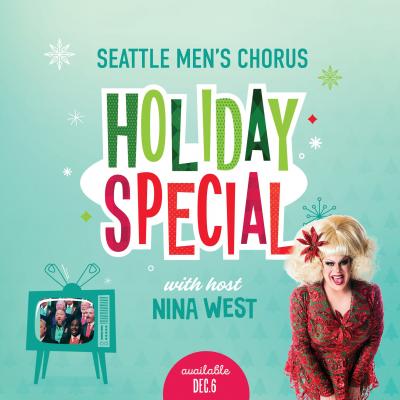 That's right, Seattle! Nothing's gonna stop us from bringing you our 40th annual holiday concert. This year you can't come to us, so we're coming to you - a-caroling!

In this holly jolly variety show, we've packed in our signature blend of classic choral splendor, familiar cheer, and zany hilarity. While we weave together beloved carols filmed from all across the region, host Nina West (with the help of her puppet friend, Holiday Herald) races against the clock to bake the perfect fruitcake before the show ends. Will they make it?

to check for the most up-to-date information.

Nina West is an American drag queen, actor and singer based in Columbus, Ohio played by Andrew Levitt. She rose to national prominence with her appearance on VH1's "RuPaul's Drag Race Season 11," on which she placed sixth and won Miss Congeniality.

West has been performing in central Ohio and around the United States for the last 18 years, doing regional theater and of course, drag. As Nina West, she has produced over 35 main stage production shows. West hosts the annual "Heels of Horror" show at Axis Nightclub and has also hosted the competition "So You Think You Can Drag?". In 2008, she won the Entertainer of the Year award and was included in Columbus Business First's "40 Under 40" list in 2018 and 2019.

Nina is a LGBTQ advocate and has raised over $3 million for charitable causes in the last decade alone through her charitable foundation, The Nina West Foundation. On June 17, 2020, Nina released a charity partnership with Country Music Legend, Dolly Parton - The "Dolly X Nina: Kindness is Queen" Collection - with all proceeds going to the Dolly Parton Imagination Library and The Nina West Foundation to benefit LGBTQ+ youth and Illiteracy.